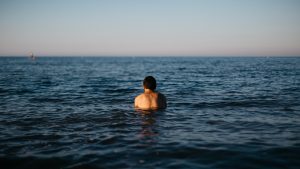 Keep getting more of what you fear?

It’s not a coincidence.  We generally go where we’re aiming.  If your eyes are on it, that’s where you’re headed.  Ever heard someone say “Don’t look down”?  That’s because looking down might increase the chances of heading that way.

What do you fear?  Do you fear being…

If running away from what you fear isn’t working, what will work?

A funny thing happens when we identify what we fear.  It gives us a chance to take a look at how that very fear might be pushing us to do things to make the feared thing happen! This is not some supernatural “force” supposedly bringing bad vibes your way.  It’s quite simple.  Here’s an easy example:  If someone’s afraid of drowning, they may avoid water and never really learn to swim.  This definitely doesn’t make them safer.  If you let fear rule your decisions, you may take actions that make you feel safer but which actually could put you in more danger.

When you choose to face your fear, you suddenly have control.

If you decide to face your fear of drowning, you don’t just jump in the water.  You could, but you might just confirm that yes indeed, it’s as dangerous and scary as you thought. But if you want to ensure success, you may take swim lessons, and practice a lot.  Even if you feel more scared, you are taking active steps to become more safe.  Eventually you will be well trained to handle yourself in lakes, pools and even the ocean.  Your fear will decrease or even go away because you will be a new you.

So how does this work in relationships?  First, let’s recap:

Ok.  So let’s take a look at Angie, who is afraid of being alone and unloved.  If she tries to avoid this fear, she may date a series of unsuitable partners, or stay in a destructive relationship just to keep the fear away.  In order not to feel fear, she will take whatever she gets and hold on to it.  That’s how it works.

But if Angie decides to face her fear, she will have to find ways of entertaining herself. She will have to get to work finding what she loves.  She will need to spend time with people she enjoys.  In doing this, she will incidentally be making herself and her life more interesting while bravely saying no to anyone who doesn’t treat her well, or bravely saying yes to meeting new or different people she may not have thought were her “type.”  She will feel more fear.  There is no guarantee she will find a great relationship, but her chances just quadrupled, at least.  Also, she’s probably finding that being “alone” is feeling pretty good now that she’s developing her own life. (She’s also a much better catch.  Who wants to be stuck with someone who doesn’t even like themselves? zzzzz.)

What kind of life would you rather have?

I don’t know about you, but I would much rather date the person working on making their own life interesting than the person at home desperate for my phone call.  Yikes.

The way forward lies in choosing to stop running away from whatever causes you fear.  It is deciding, instead, to walk toward what you want and what you value even if it scares you. It’s knowing that even though we have little or no control over what happens in life, we have lots of control over ourselves.

Margie Wheelhouse is a Licensed Marriage and Family Therapist.  She provides couples and individual counseling in her office in Springfield, Illinois, and throughout the state by phone and web.  Margie helps couples build great relationships and repair broken ones.  She once feared creating a website, having her photo taken, and blogging.  She’s still afraid of bees, sometimes.