It Seems So Silly

People who come to me for couples counseling are so often frustrated because they keep having battles over the dumbest things ever.  Like when something happens and you suddenly feel upset but it looks trivial to the other person.  You try to just let it go, but it keeps coming back.

Nobody likes to be the one feeling crazy upset over something that looks on the outside like absolutely nothing.  But the truth is, it’s not nothing.  It’s something.  You’re not crazy!  You know you’re not.  The problem is that you probably haven’t been able to really pinpoint exactly why you feel so upset over a spoon being left out or a comment about a dinner roll or an imperfect Valentine’s day gesture.  Or maybe you do know, but your partner sure doesn’t get it.

Here’s a little trick for all of us “crazy” people who find ourselves upset over something that our partner seems to think is no big deal.  Pretend that he or she has nothing to do with it.

The thing is, what’s driving you crazy has to do with the other person, but not in the way you think.  When we have over-sized responses to seemingly small things, there is a lot going on inside of ourselves that needs to be acknowledged, loved and healed.  Let me walk you through an example:

Let’s just SAY, for a hypothetical example, that my husband makes a comment about a drink I order.  Maybe it’s an expensive girlie drink that I order when we are out to dinner one night.  For the sake of a story, let’s say it was some kind of gin fizz with a fun name, and that it probably cost three times what it should have.  But maybe I was in a happy, extravagant mood that’s quite different from my normal, level-headed frugality.  Imagine he hears this order and says something like “Wow, that drink costs almost as much as dinner.”

Okay, forget the hypothetical, and let me admit that when this very thing happened, I freaked out (inside of course) and felt quietly angry.  That is — until we were walking to the car later.  This is one of those moments where he had absolutely no idea anything was wrong until I finally felt upset enough to say something. Surprise! Oh how he loves when that happens.

How can this be turned from an icky incident into something we can laugh about later.  Instead of focusing on him and how COULD HE say that to me?! (which I totally did), I could focus (which I did later) on what I was feeling on the surface, and below the surface.  I could try to take really good care of myself by getting to know exactly how and why I was hurting and what that had to do with ME.

Taking him out of the equation turns out to be a great idea.  Why?  Because my unsuspecting, kind, generous husband does not begrudge me anything.  He is not an artist at knowing exactly what to say at all times in exactly the right way.  But the truth is, he loves me, and if I want the stupid fancy drink, he wants me to have it, and enjoy it, and even have another if I like.  He may not want one himself.  Or he may think they’re stupid. He may think there are a million better ways to spend a few bucks (like on an overpriced, decadent dessert), but ultimately he really doesn’t care much at all about the whole subject.  In truth, he spent zero time thinking about my drink and tons of time thinking about the dessert menu. (Tons)

So back to pretending this wonderful man doesn’t exist:

Looking back at only myself, I realized it was definitely ME who begrudged me the drink.  I’m kind of a cheapskate, in truth, and I am often very uncomfortable with treating myself to something.  I won’t go on about why, because it would take too long and be boring, but just to give you a quick idea:  I have a lifelong respect for my hard working parents and their sacrifices, a strongly instilled ethic of not being “selfish,” I’ve had to scrape at times to get ahead, and of course I have a good dose of guilt that my gin fizz is taking money away from starving people across the world.  When I looked inside, I realized that I was extremely conflicted about that drink order, and I didn’t even know it! 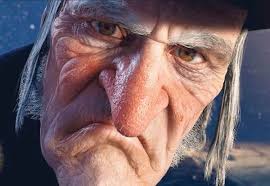 Boy am I a Scrooge!

The worst part is, my emotional make-up is such that I automatically put ALL of that on my husband, in an instant.  And I didn’t even realize it.  Because many of us don’t realize these things.  It’s human nature.  We all have sore spots.  Many times when someone else makes a comment or gesture that confirms exactly how WE feel about ourselves, we think it’s them. And the fear that they feel that way about us makes it very, very difficult to believe that they don’t.

The good news is, when we take the time to understand ourselves, it can make a big difference both in our own healing and in growing our relationships.  Once I could confess how I felt about things, my husband of course felt relieved that I no longer thought badly of him.  And, more importantly, he could listen and care about the part of me that is ashamed to have something nice.  That is a truly wonderful and important thing.  For my money, it’s one of the best things about a long term, growing relationship.  The more we know each other, the more we can love each other.

We almost missed it

All of that could have been snatched out of our hands had I just “let it go.”  Or maybe worse, I might have left it at blaming him.

So back to my point.  In counseling, I notice that most of my couples find themselves getting stuck in arguments over and over and over again.  It’s often over seemingly “stupid” things, and they don’t understand why or how to stop.  I help them untangle the mess and look at what’s really happening.  It’s amazing how often we don’t even realize how much is going on with ourselves.  Because of this we miss the fact that the same feelings often underlie most of our arguments.  The good news is, once we can identify what’s really happening, couples can step out of this negative cycle.  Only then can they start to know each other, and love each other, better.

To couples that accomplish this, I would like to raise a toast to you, with my big, pink, bubbly, overpriced drink!